We decide to do some laundry and Gini, the ingenious one, rigs up a clothes line in front of the cabin. We have large steel tubs that work great for washing and rinsing. 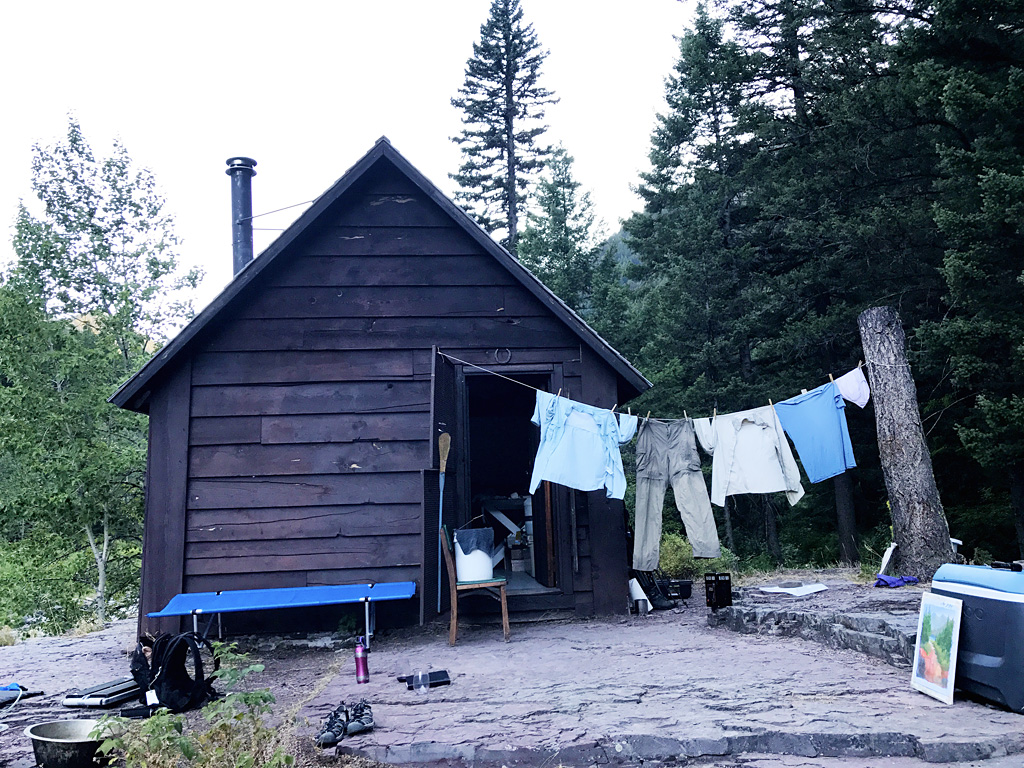 Chores done, we get ready to head down to the river. Today’s challenge is to paint rocks in the river. I’m hoping to capture the subtleties of rocks under water and observe how the water moves around the rocks protruding out of the river. 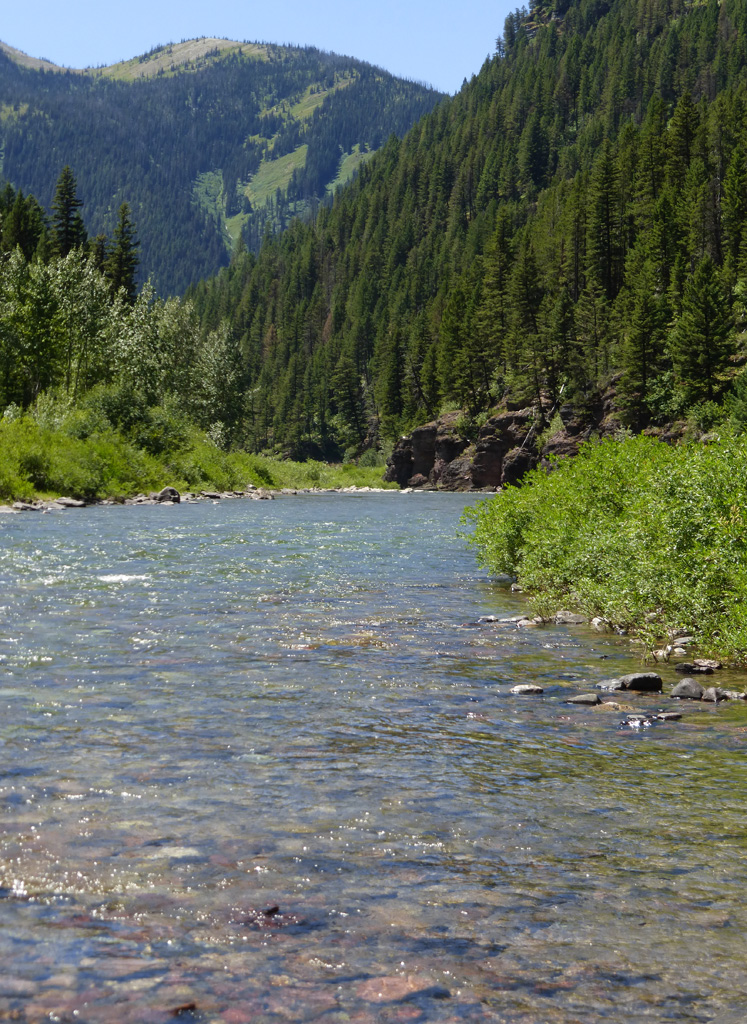 Looking downstream, this is our view as we attempt to paint rocks and water. Not a bad place to hang out for a couple of hours!

I precede Gini down as I will need two trips to get my gear down to the river from the cabin. As I reach the willows at the edge of the beach, I hear a distinct clop, clop, clop coming from the river behind the willows. My heart starts to race and that fight or flight instinct takes over—I go with flight! I don’t have my bear spray with me and we know there is a moose and calf in the vicinity. I drop my gear, turn right around and rush up to the top of our rock. I look over the cliff’s edge and try to see what made the noise but I can’t see anything in the willows.

I go to the cabin and just as I reach the door, Gini opens it and sees my big eyes and alarmed look. (She chuckles later about this.) We go down together, both of us with bear spray in hand.

We find new tracks on the beach. We can’t quite figure out what it is. It looks like something was dragged. If anyone has a clue, please let me know? Whatever it was, I must have startled it and it fled. So curious as to what it could have been. From now on, I will keep my bear spray on me and at the ready.

The tracks. What are they?

Back to painting and we set up at the river’s edge. I reflect back to a workshop I took with Jo Vloothuis back in 2015. He had given us a demonstration of painting rocks under water.

First I put a grey blue tone wash in the upper third of my vertical format. The lower two-thirds, I make  gold/yellow ochre wash. The wash is achieved by laying down a thin layer of pastel on the paper and then dipping a brush in rubbing alcohol to wash over the pastel and blend it into the paper. I use rubbing alcohol because it dries more quickly then water. During these hot days, I could just have easily used water.

I start adding rocks protruding out of the water in a somewhat haphazard “s” curve. In my sweet spot, in the upper right third, my plan is to have rapids spraying up from the rocks.

I work at it for a couple of hours. I experiment with how to achieve the rocks under water, brushing away the pastel when it isn’t working. I observe closely and see that the colors underwater are more muted. There seems to be a slight glaze of blue over certain areas. 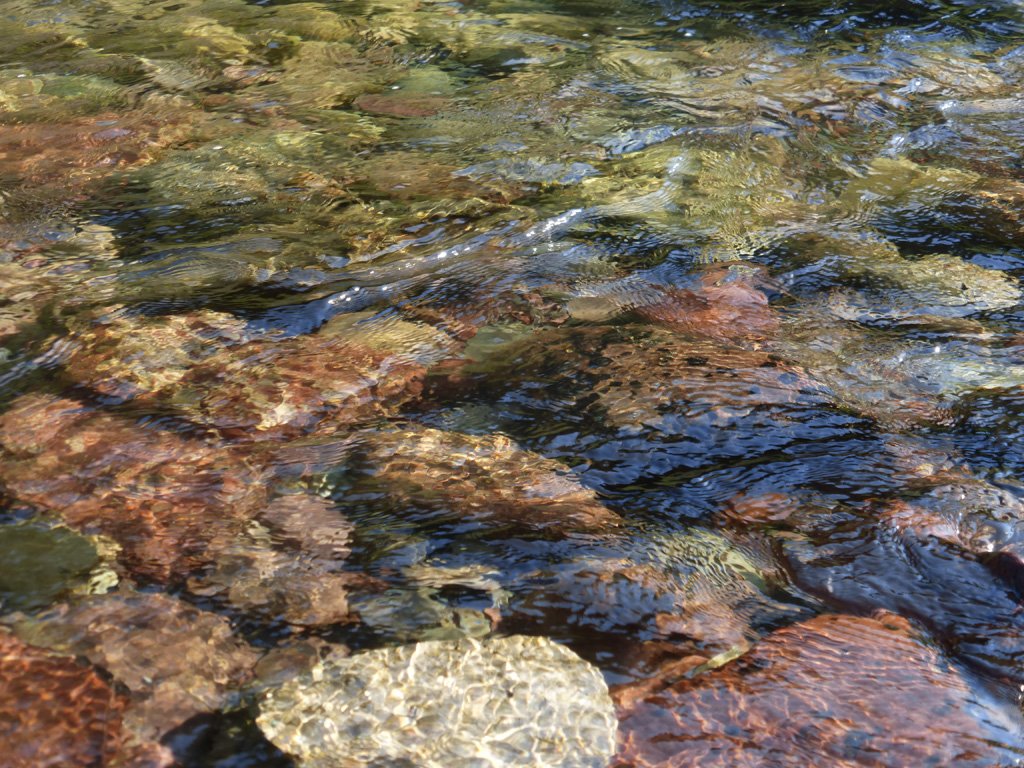 The rocks with the blue reflections on the surface and also the muted tones of the rocks. The deeper the water the less colorful the rocks.

As is typical for me, it’s a colorful piece—probably more colorful than is actually in the scene. I exaggerate the saturation of the colors to give the painting some life. I’m fairly happy with my first attempt. I feel I captured the essence of water flowing over rocks. The splash in the sweet spot adds movement and energy. 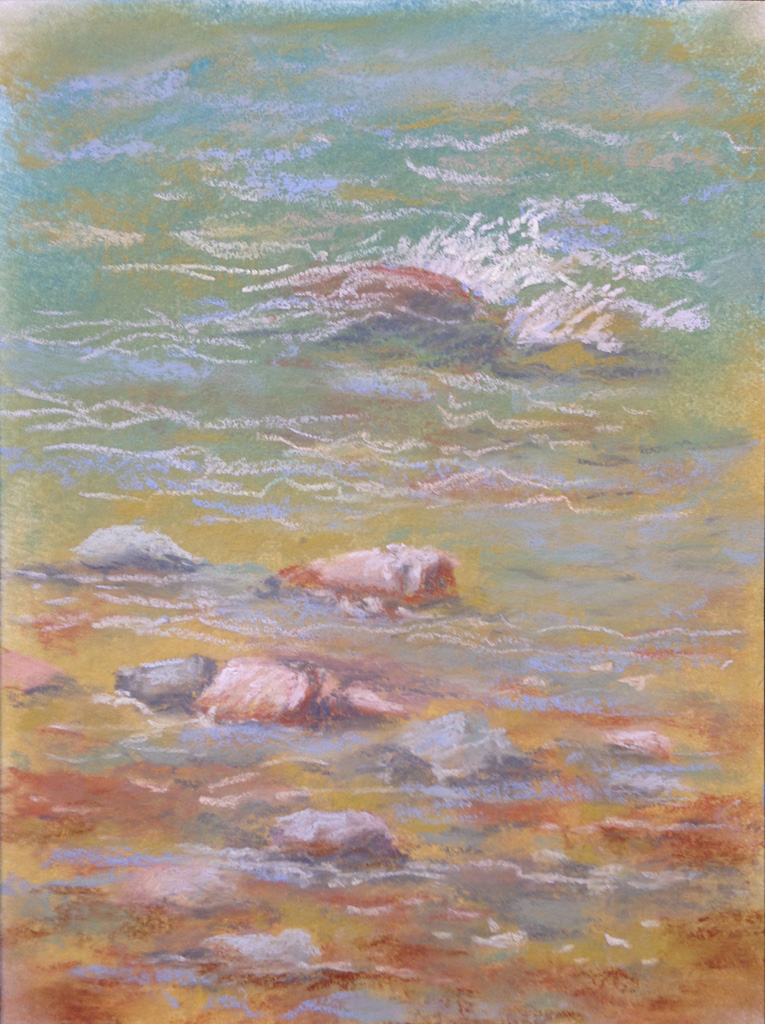 My river rocks painting. 8″ x 6″. I figured out how to achieve some dimension above and below the surface of the water. I will need to practice this.

Throughout our stay so far, we haven’t seen anyone besides a few rafters passing us by on the river. It has been so peaceful and calming to have this part of paradise all to ourselves. It’s also been fun to wave at the boaters as they float by—what a fun way to travel through the wilderness! 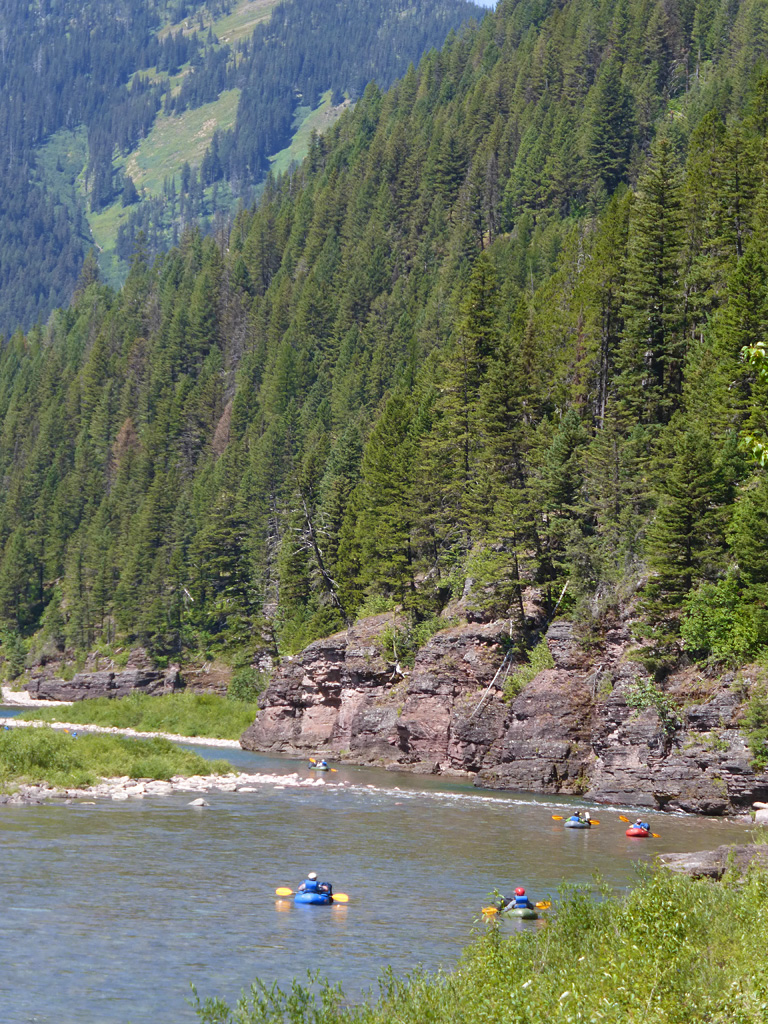 What a way to travel! I’m hoping to try it someday.