The morning was beautiful, the sun was coming up over Crane Mountain with hardly a cloud overhead. There was a fog bank that had settled over Flathead Lake and was shifting in ever changing patterns. I checked the weather report and rain was forecast for 3 o’clock. If I was going outdoors to paint, the time was now.

John made me toast and I had my morning green tea. Geared up with my backpack of supplies, easel, assorted sizes of boards, warm clothes, water, phone, and bear spray (you just never know), I was on my way by 10 am. My goal was to find a spot where the sun was filtering through the trees. I thought of my sister’s lot but I’m not sure if they get the morning sun at this time of year. The clouds were on the horizon and heading my way, I didn’t want to waste the 20 minutes it would take me to find out.

I chose to go south, where I was fairly certain the openness in the forest would let the sun in. It’s an old road and trees have started to encroach but it still has the bones of a trail. I chose well, the sun was illuminating the far side of the trees and coming in at a low slant. I set up in record time, did a quick sketch in my little book to get familiar with the scene, and started the painting.

It was a good thing that I found the spot and moved quickly. The sun appeared and disappeared throughout the first hour. I was able to get most of the main elements blocked in, the values correct, and the beginnings of some detail. The sun disappeared and I realized the weather was building as had been forecast. I wasn’t going to leave until I had painted the scene the way it was when I arrived. I continued to work for another hour until the wind picked up. I felt that I had captured the color notes well and the substance of the scene, so I packed it up and post holed my way back home.

The set up with the sun filtering through the trees.

The rest of the day was slated for chores. I needed to clean the house which had been neglected for awhile as you can imagine. Thank goodness for John who has been my MVP and stepped up to fill in over the past several weeks. So I’m vacuuming and washing the kitchen floor and the afternoon is just getting more stunning with each passing minute. I check the weather report, no rain is forecast now, just snow at 6 pm.

The house isn’t that dirty—really! I should be out there catching the afternoon light hitting Woods Bay. As my husband says, I’m hopelessly addicted to painting…oh darn!

I finish up washing the kitchen floor and run down to my studio lugging up all my gear from the basement in one fell swoop. the afternoon is so warm (46 degrees) and I don’t need all my warm clothes, I do the bare minimum. I have an hour until my scheduled phone visit with my sister. I text her and ask for another half hour—of course, she agrees—she’s the best sister!

I have often painted the scene across the lake from my windows but today, I thought why don’t I paint Woods Bay—I haven’t really painted it close up with the buildings. I knew my time was limited so I used a smaller board. My objective again was not to perfect a painting but to capture the light and how it was hitting the bay and the mountains behind. It was a fun little study and I will try the scene again sometime—practice makes progress! 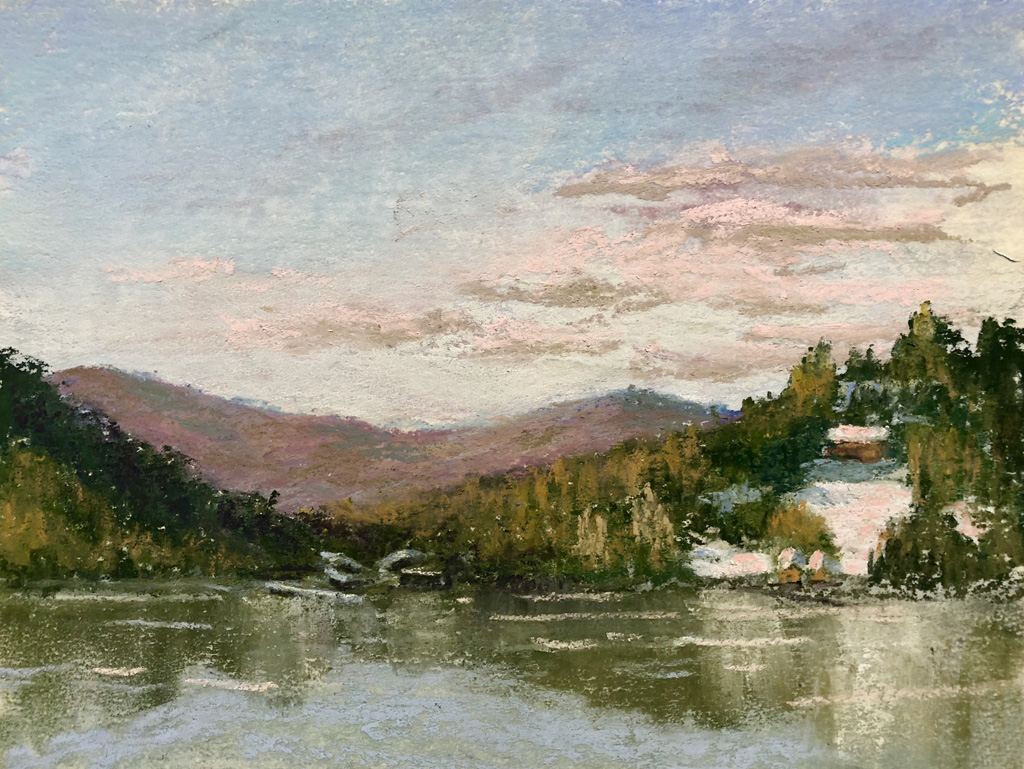 ©Francesca Droll, Woods Bay, 6″ x 8″, pastel. A small, quick study but I enjoyed some of the colors I used especially in the background mountain. 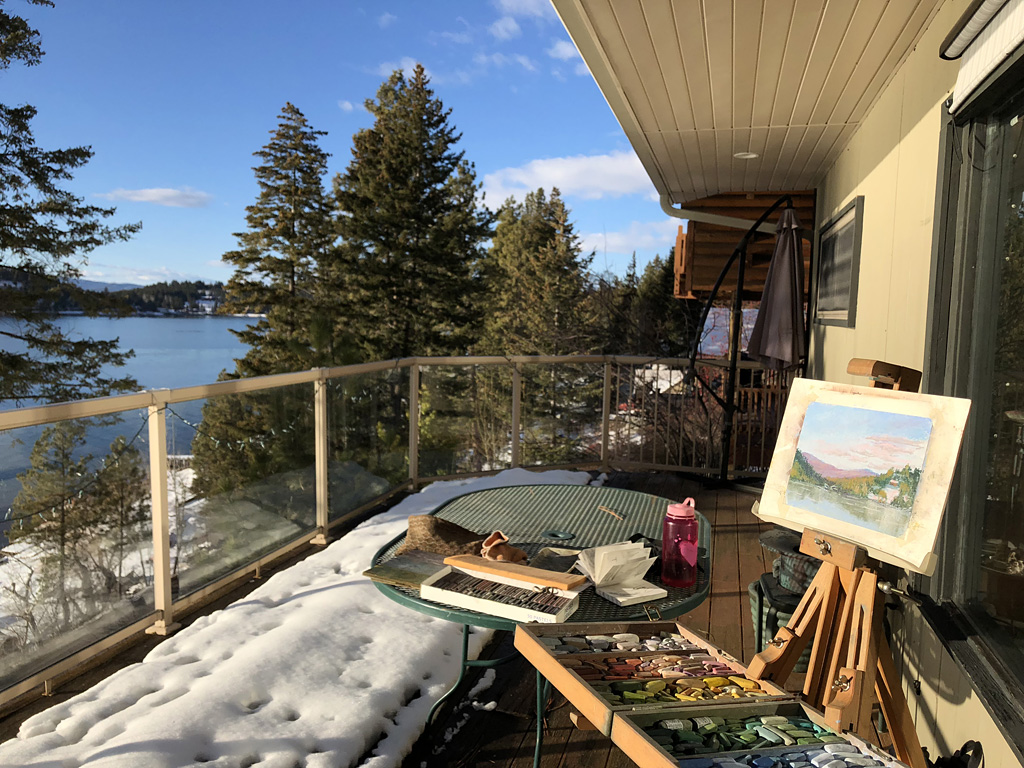 I’d set up in the shade of large pine tree falling over the deck but that didn’t last long. The sun was hitting me full on the back and it was warm. I didn’t want to stop and take the time to shed layers as the light was changing quickly and I had a phone call to make.