Our alarms are set for 7 AM but I wake at 6:45. John has just gotten back into his sleeping bag after putting on a hat and his down vest…another wonderfully chilly morning. With the heat, day after day, we so enjoy the coolness of the morning. I hate to do it but I tell him that he has to get up in fifteen minutes. I make my morning trip to the outhouse and while I’m there, I hear the call of an eagle.

The self-evident outhouse which is just a short walk down the trail from the cabin.

When I get back, I tell John that I heard an eagle and he grabs his camera. Maybe he can get a shot of the eagle before he leaves. He sees one, then two, and three but can’t capture them. Poor John—it feels like they are taunting him. I will try again this evening when the eagles are fishing up and down the canyon.

I go down to the beach to start the fire for breakfast—we are having breakfast burritos that we will warm on the grill. I’m on the beach and thinking that I haven’t started a fire in years. Even though I’m a frequent camper there is always someone else who wants to be ‘fire builder.’ I find dry twigs and get as many as I can. Do I put the large logs on the bottom or the twigs? I can’t remember. 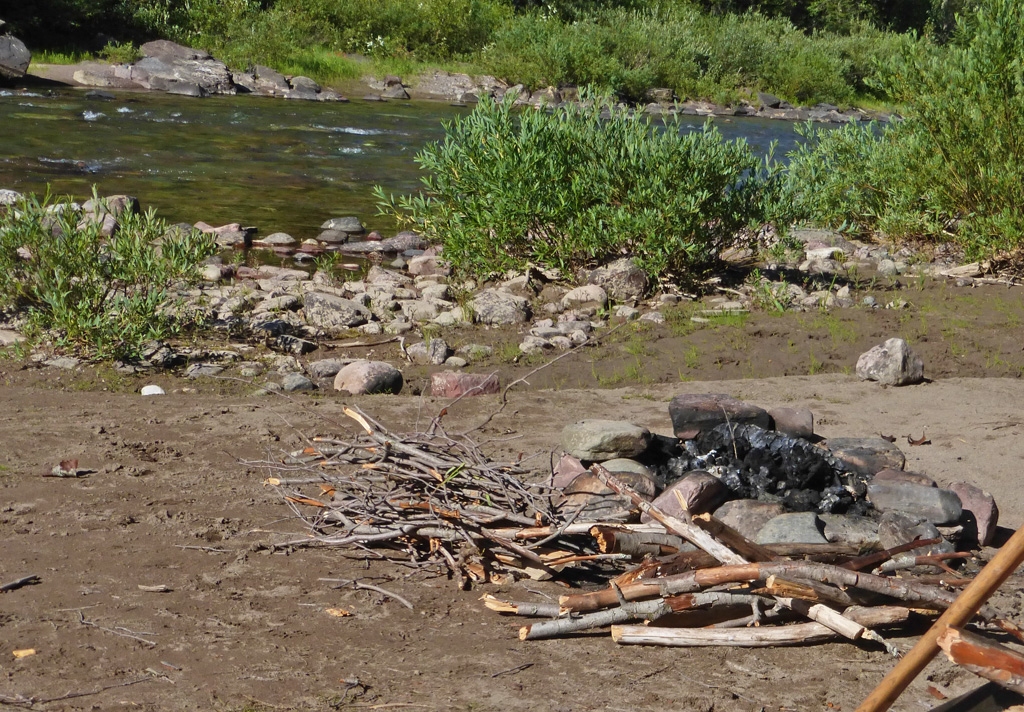 Kindling for our fire. Our guys were great help and loaded us up with firewood.

I make my best guess thinking that I’m going to lose my “Wilderness Woman” badge and embarrass myself if I can’t get this fire started. Luckily, I do it right and soon it is blazing. Gini looks over the edge from the perch and gives me a wahoo! I put the burritos on the grill and turn them at intervals.

John shows up with his camera—still trying to capture that darn eagle. He leaves to pack since he and Randy are heading out today. I actually see the eagle fly by and I try to get the shot but miss—again!

Gini comes down to tell me that “Mom” is stuck in the cabin and they can’t het her out. “What?” I ask. Earlier in the week, I had told Gini that when I see a hummingbird, I think of it as a visitation from my Mom who has passed away. She collected hummingbirds—decorative ones, not the real thing, although she did put hummingbird feeders out on her back patio. 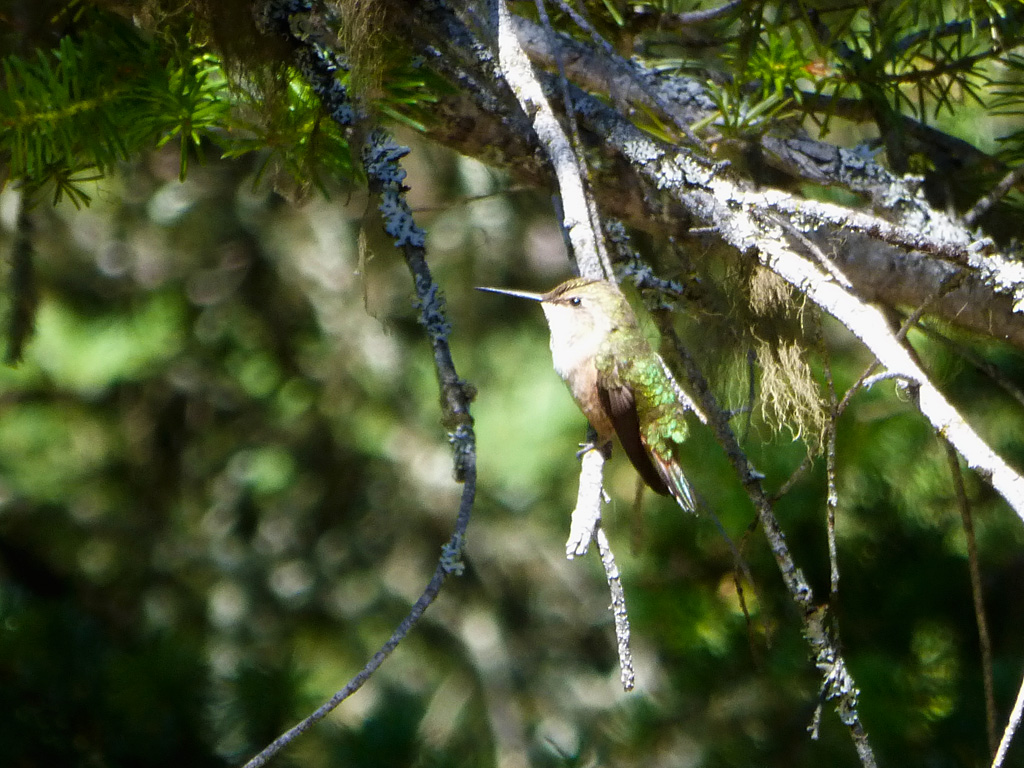 One of the hummingbirds that frequented our campsite. I believe this is an Anna’s Hummingbird and female since the males have the more colorful feathers.

I go up to the cabin and think I will have to try and catch her with my hands. Gini has already tried to scoot her out with a broom without success.

In the cabin the hummingbird is resting at the open transom. I get the broom and the hummingbird flies back and forth at ceiling height bumping her head. I guess it’s her natural inclination to go up to escape. Several times I get her to settle on the broom but every time I get close to the door, she flies off. I keep trying and think to turn the broom so it is flat and she can see where I’m taking her. I also think that she is probably exhausted and finally with the next attempt, she flies through the door. Thank goodness! Freedom!

We can go back to preparing breakfast. We eat our delicious burritos and then we have to say goodbye to Randy and John. They leave at 9:30 to beat the heat on the trail. We are sad to see them leave and we don’t envy them the hike out. We’ll have to do it too, very soon, in three days.

The Four Musketeers, or should I say, Mouseketeers since we still have that very annoying, noisy, nuisance of a mouse. 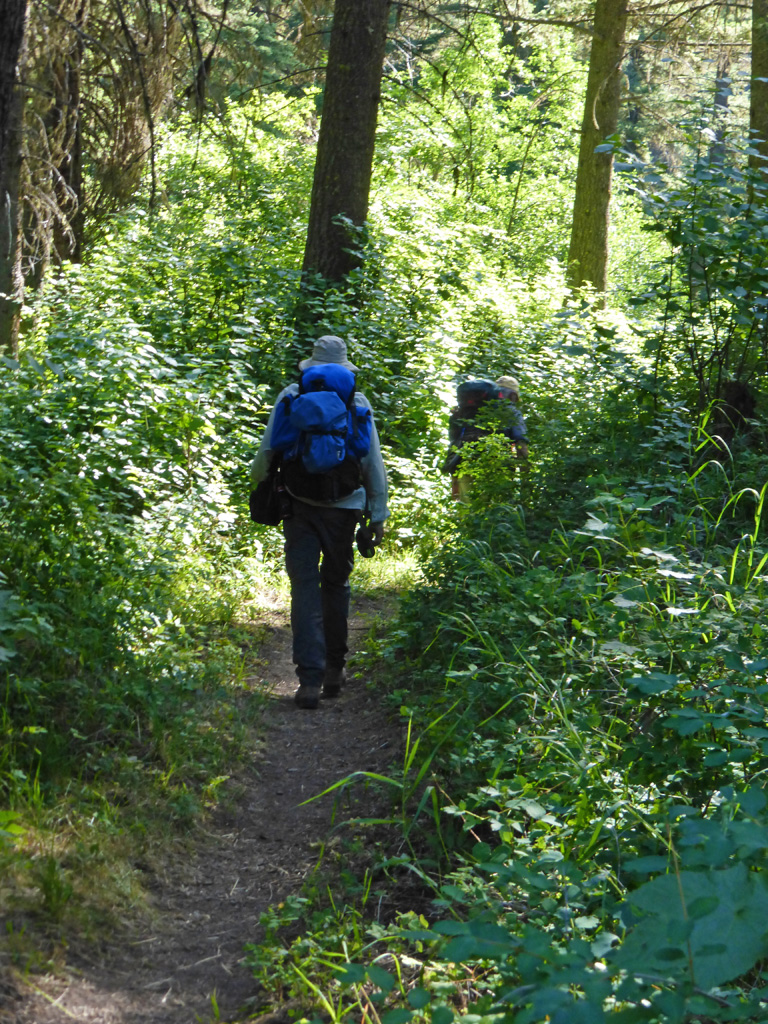 Our guys leaving. We are really sad to see them go but have to admit that although the company was fun to have, we need to get our focus back on painting again.